The independent physician practice is slowly disappearing in Western New York, with a series of maneuvers this year illustrating the changing reality for doctors in private practice.

They range from mergers of smaller practices into multi-specialty practice groups; sales of practices to hospitals and transformations that make practices part of captive physician corporations closely affiliated with health systems.

The reasons for the changes vary, but changing funding models and declining reimbursements are leading factors, said Christine Ignaszak-Nadolny, executive director for the Medical Society of the Counties of Erie, Chautauqua & Orleans.

“Everyone is looking to see how best they can enhance their services and live within the boundaries of the declining reimbursements,” she said. “The whole landscape is changing, so they’re looking for ways to continue to practice.”

“Physicians are looking at what is best for their practice, for their patients as well as for themselves,” she said.

Here are some of the changes:

Mary Ann Pettibon, CEO at Oak Orchard, recognizes that’s an unusual move for a private practice, but one that offers an alternative option.

“It’s very different,” she said. “What historically we’re hearing in the community is those private practices that do join larger hospital systems are not necessarily as satisfied as if they would have done an alternative. We’re pleased this particular practice has chosen the alternative.”

Succeeding independently just isn’t easy anymore, said Dr. Jerome Andres of Niagara Family Medicine, who began in private practice in 1984 and is now one of three physicians at the practice over the age of 60.

“You can’t come out of residency and start a practice of your own — there are just too many factors that weren’t there when I started,” he said. “It’s very expensive for practices to recruit. We figured attaching to a bigger entity would make it easier for us to continue into the future.”

The practice is among dozens in the past year that have explored options to join Catholic Health, Trinity Medical or another independent practice within Catholic Medical Partners. The conversations all start with what the physicians need and want, said Mark Sullivan, CEO at Catholic Health.

“It’s not a cookie-cutter approach for Catholic Health,” he said. “We’re not in a huge acquisition mode. It’s more about where is the community lacking access and where physicians groups are in that point in their career for succession planning and exit strategy.”

In the end, the decision is based on whether affiliating or merging is beneficial for both sides, Sullivan said.

“We’ve said yes to some, and no to others. It depends on the fit from the culture, quality and values side, and where health care is headed,” he said. 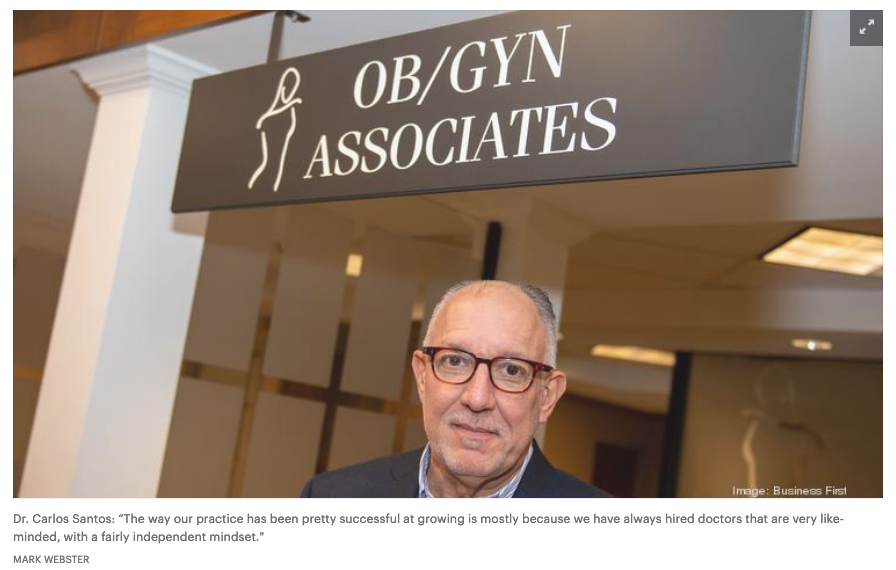 Dr. Carlos Santos, a partner at OB•GYN Associates of WNY, said his group chose to become part of General Physician P.C. to offer retirement options, ensure continuity for patients and allow providers to practice medicine without having to worry about the business side.

Darryl Ernst, president at GPPC, said being affiliated with but independent from a hospital system gives physicians an environment that’s closer to what they’re used to without having to give up all the reasons why they went into private practice in the first place.

“We see a lot of physicians in the community who are working if not as hard and as long today but probably almost longer, but for the same income or in some cases considerably less,” he said. “So the economics are really stacked against private practices, and really especially against smaller to medium-sized practices.”