Dr. Jeffery Neu's Wife to be Recognized for Life-Saving Actions

Dr. Jeffery Neu's Wife to be Recognized for Life-Saving Actions

General Physician, PC's Dr. Jeffery Neu and his wife Heidi will be among the healthcare professionals honored tonight in Williamsville for their role in saving the life of a high school basketball referee who collapsed during a game in December.

Benjy Bluman is grateful he's alive and able to attend games as a fan.

So too is the Western New York boys basketball community after the 74-year-old Hall of Fame referee almost died after his heart stopped beating while officiating a game on Dec. 28 at Williamsville North High School.

Those who revived Bluman, a swift-acting group of medical professionals who happened to be in the right place at the right time, will be recognized in a ceremony at 6:40 p.m. Wednesday at North before the resumption of the Williamsville East versus Williamsville North contest with the winner capturing the Five Guys Tournament title.

What the group that includes Dr. Jeffery Neu, his wife and registered nurse Heidi Neu and Dr. Ray Ogra did was breathtaking – a surreal 15 minutes in which Bluman went from lifeless to regaining a pulse.

With 2 minutes, 52 seconds left in the first quarter, play stopped because Bluman collapsed to the floor underneath the basket closest to the Flames’ bench, making a loud thud.

One woman appeared to immediately call 911, as several folks rushed to Bluman’s aid. In addition to the Neus and Ogra, that included nurse Takesha Leonard, who began CPR and mouth-to-mouth resuscitation and continued until he regained consciousness. They also used a defibrillator to shock him three times with Bluman’s pulse returning on the last attempt.

“Mrs. Leonard must have known something from past experience,” Williamsville North Athletic Director Steve Ferenczy said. “It was surreal, but thank God there were certified personnel and people willing to work on him, take the risk and use their training to save his life.”

"It was a reminder of both the beauty and frailty of life," Ogra told The News last month.

Wednesday night will be for recognition, but it won’t be first time Bluman has had a chance to thank Jeffery Neu, Heidi Neu and Ogra for the roles they played in bringing him back from the dead.

Bluman sought them out after being released from the hospital Jan. 3 with what doctors termed as an electrical glitch in his system. He didn’t have a heart attack and there wasn’t any damage to the heart muscle, he said.

The Blumans made the trip to Williamsville East to see a Jan. 17 game against Hamburg so that Benjy could meet the folks who saved his life and thank them. He did that and found out even they weren’t sure they would be able to save him.

“I got to meet Dr. Neu and his wife, Dr. Ogra and his wife and almost all the other parents there,” Bluman said. “The players were high-fiving me, saying nice to see you up and about.

“Me and my wife thought it was a good idea. We knew there was going to be an evening planned, but I felt it was important for me to meet these people. I wanted to do it sooner rather than later. … They were honest and told me I was pretty close to not being around. They had doubt that I was going to live through the whole thing.” 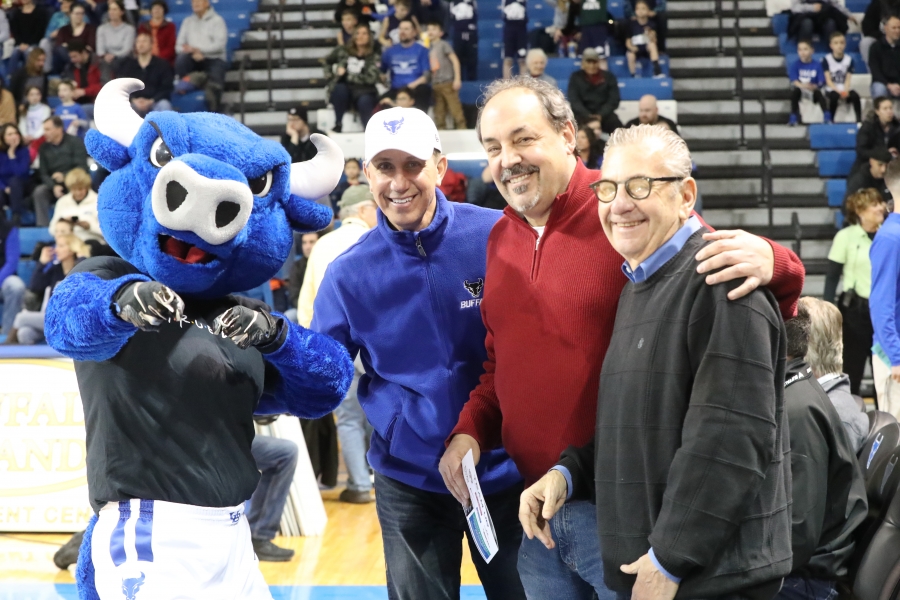 “He looked and sounded like himself,” Killinger said. “I’ve known him since I was in high school. He was lively and energetic. He looked like he could’ve officiated the game and it was great to see him.”

Bluman said he’s not officiating any more games this season. If he decides to come back for a 46th season next winter, it’ll be a decision made in consultation with his physician.

That said, there will be a Bluman wearing stripes Wednesday at North. Benjy’s son, Kory, will take his place.

“I think it will be emotional even though I don’t want it to be,” Benjy Bluman said. “The important people are the ones being acknowledged for bringing me back to life."

“We’re very fortunate to be in the position to honor the people who saved him,” Killinger said. “It was a very scary situation. We weren’t sure what was going to happen in the moment. Now that everyone has had time to reflect and emotionally heal we're all ready to honor the people who saved his life … looking forward to a great night after experiencing a very traumatic night.”